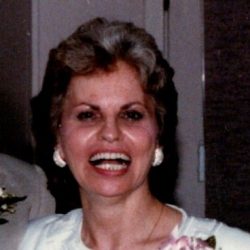 Betty R. Smith Lewis, On Christmas Eve, in the year of our Lord 2020, angels gently carried Betty to her eternal Home in Heaven. She was there to rejoice and lift up her voice as she wished her Lord and Savior, Jesus Christ, a Happy Birthday. What a glorious reunion there must have been!

She was born to her loving parents, Roy and Maggie Rakestraw, on December 16, 1931 in Hawkins County. Both preceded her in death. She was also preceded in death by her husband of 29 years, Reverend Allie J. Smith. She was an amazing wife; supporting
him as he Pastored at Mt.Olive Baptist Church, Plum Grove Baptist Church, and Calvary Baptist Church, all in Hawkins County. He later became an evangelist, and she was always ready to travel long distances to support him. She had a beautiful smile and an infectious laugh which made meeting many new people an easy task. He was, as she said, “the love of my life”. She later remarried and resided in Jonesborough for 18 years. She returned to live in Kingsport, near her daughter and son-in-law, in 2002. She attended Litz Manor Baptist Church in Kingsport, as long as she was able and enjoyed her church family.

Survivors include one daughter, Donna Smith Long and son-in-law Randy Long, who became her special and loving caretaker once she moved into assisted living and later to a long-term care facility. He kept her supplied with all the chocolate she could eat or drink which made him an extremely welcome visitor. Donna and Randy reside in Kingsport. She is also survived by one grandson, Justin Manis and his wife Sydney who reside in Johnson City. Other survivors are one brother Billy (Shirley) Rakestraw and brother-in-law, Reverend Lyons (Sharon) Smith, many nieces, nephews and extended family. She had a special “adopted” son, Rev. Elser G. Bailey of Surgoinsville, who is also a Vietnam veteran. She was extremely proud of him.

Her body was laid to rest at Christian’s Bend Cemetery in a private ceremony.

In lieu of flowers, the family requests anyone who wishes to honor her memory to please donate to their local food bank.

The family also extends their warm thanks to Johnson – Arrowood Funeral Home. Many thanks to Brian, Hunter, Jason, and the whole staff who made everything so easy during these excessively difficult times.