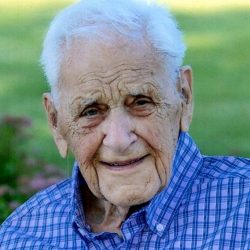 Mr. Bailey was born on April 20, 1921, in Willow Lake, South Dakota. Mr. Bailey was most proud to have attended rural Woodland School for 8 years. He was NEVER late and NEVER missed a day of school.

Mr. Bailey’s next accomplishment was that he joined the United States Navy in 1940 and proudly served twenty-four years. During his naval career spanning WWII and Korea, he served on the USS New Mexico and USS Saratoga sailing in the Pacific and the Mediterranean. At the time of retirement off the USS Valley Forge his rank was Chief Machinist Mate and everyone knows the Navy does not run without the Chief!

In post Navy years, Mr. Bailey went on to develop his entrepreneurial talents through various business ventures, eventually, he returned to his home state of South Dakota in 1974 and began a furniture stripping business which led to running several successful secondhand stores and ultimately becoming an auctioneer. He retired once again in 1995, and relocated to Tennessee to enjoy warmer winters, traveling, and spending time with family and friends who fondly referred to him as “Mr. B. from Tennessee”.

Mr. Bailey became a member of the Kelvyn Park Willing Lodge 1075, AMAF Masonic Lodge in Chicago, Illinois in February 1954. Mr. Bailey continues to be a proud member of the lodge celebrating 66 years of membership.

Mr. Bailey was preceded in death by his parents, Lloyd and Anna Bailey of Clark, South Dakota.

Mr. Bailey is also survived by a host of other relatives and friends.

A private celebration of life service will be held on Saturday, May 23, 2020 at the Johnson-Arrowood Funeral Home of Church Hill, Tennessee for immediate family. Military honors will be conducted by American Legion Post 3/265 Honor Guard.

In lieu of flowers, the family asks that donations be made to the South Dakota Veterans Cemetery located in Sioux Falls, SD http://vetaffairs.sd.gov