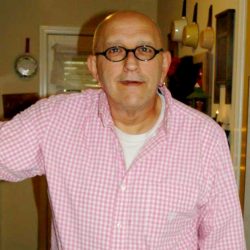 KINGSPORT – Mack met his Lord and Savior, His Parents, and all his loved ones that had gone before him on December 8, 2020.

Mack was a resident at the Wexford House in Kingsport, TN for 20 months following a stroke.
Mack spent most of his life in Johnson City, TN. He was a floral designer at the early age of 15 with Homer and Betty Falin as his mentors at L.J. Horton Florist in Big Stone Gap, Virginia. Mack Graduated from Powell Valley High school in 1975 and was the Drum Major of the Band. After high school, Mack attended MECC in 1976 then went on to Floral Design School in Ohio.

For a short time, Mack also worked at Westmoreland Coal company as a Coal Car dropper. Then, he became owner and operator of Flowers by Mack in Big Stone Gap, Virginia. Small town life wasn’t for him, so he closed his shop and went to work for Evergreen Florist & Greenhouse in Kingsport then Misty’s Florist and Greenhouse in Bristol, TN for over 25 more years, until he retired. Mack even won Tennessee Floral designer of the year for several years.

Mack was a member of the First Baptist Church of Big Stone Gap, but also attended Artesian Baptist church in Big Stone Gap.

Mack Loved people, never met a stranger, did lots of charity work and lived his life to the fullest.
Mack loved to travel and loved the fine art world. Dancing was one of his hobbies and in the late 70s and early 80s, he and his dance partner Carol Maggard Ketchersid taught disco at the Appalachian Arts Center., He also taught classes on floral design for the garden club and other social and private events. Mack was a member of the Gap Corporation of Big Stone Gap.

Mack also loved being at the Bristol motor speedway where he decorated the VIP suites during race week. Mack was an avid bowler and on many bowling leagues over the years. His favorite music was Old and New rhythm and blues gospel. When he heard a new song he would call his sister and say, “I heard a new song that you would love.”

Mack participated in life to the fullest with his friends and family.

Mack leaves behind his only sibling, his Sister Donna Roller Herron and Husband Ralph, his only Niece Amy Herron Flippin and husband Jeff and his only great-niece Samantha Flippin, all of Church Hill, TN.
Mack leaves behind his best friends, Marie Jones of North Carolina, Adam Patterson of BSG and Atlanta, Georgia, Jackie Perkins of Abingdon, Viriginia and his other special friends Stephen and Deborah Todd of Kingsport, TN

Services for Mack will be private and in lieu of flowers, donations may be made to the Wexford House Christmas Fund 2421 N John B Dennis Hwy, Kingsport, TN 37660

His family would like to thank the caregivers at the Wexford House and to the Johnson-Arrowood Funeral home of Church Hill, TN