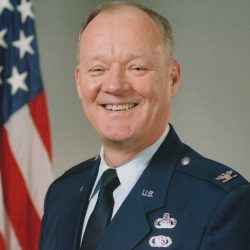 CHURCH HILL – Colonel Raymond P. Joinson (Retired, USAF) took his last breath on August 25, 2022, and departed for a trip to heaven. He leaves behind his wife, Carla, and son, Eric, who meant the world to him, as well as a brother, John (Karen) and sister, Mary Elizabeth. The many friends he made during a busy lifetime will sorely miss him.

Ray was born and raised in Wilmington, Delaware. He was a first generation American whose father (Eric) and mother (Marjorie) left Great Britain after WWII to pursue their dreams in this country. As an altar boy serving at the local VA each Sunday, he aspired to one day become the Pope. He eventually reconsidered that dream and instead pursued a career in the military, where he served faithfully in the United States Air Force for 30 years. He attended the Virginia Military Institute for four long and grueling years, where he formed lifelong bonds with his Brother Rats from the class of ’80. Ray received his commission as a second lieutenant upon graduation and began his career as a Deputy Missile Combat Crew Commander at Ellsworth AFB. After many varied assignments, Ray wound up his career at the Pentagon as a Reserve Advisor to the Air Force Inspector General. He was a survivor of the 9-11 attack on the Pentagon, and later served as Combined Forces Air Component Commander Liaison and Deputy Director Air Component Coordination Element in Kabul, Afghanistan. His awards and decorations include the Bronze Star, the Air Force Expeditionary Service Ribbon with Gold Border, and the Afghanistan Campaign Medal with star device.

Ray embraced many hobbies and enjoyed learning and doing new things. He could code a computer system, scoot his boots in a Texas dance hall, build a shed on his farm, and drive boldly into the muddiest fields known to man. He enjoyed people immensely and found something in common with nearly every person he met. Ray cherished the friends he made wherever he lived, but none could rival the place in his heart of the children who called him Papa Ray. His church families were an important part of his life, beginning with the Harvesters in San Antonio and ending with his wonderful church family at McPheeters Bend Missionary Baptist Church in Church Hill.

A visitation will be held on Tuesday, August 30, 2022, from 5:00-7:00 PM at the Johnson-Arrowood Funeral Home in Church Hill. The funeral service will follow in the funeral home chapel with Pastor Heath Smith officiating. A graveside service will be held at 11:00 AM on Wednesday, August 31, 2022, at the Mountain Home National Cemetery, 215 Heroes Drive, Mountain Home, TN 37684. Those wishing to attend the graveside service are asked to meet at the cemetery by 10:45 AM.

His family would like to thank everyone, far and near, who offered help and comfort during his difficult illness. They would especially like to thank the dedicated staff at Mountain Home VA, who gave him such wonderful care in his final days. God is good.

Johnson-Arrowood Funeral Home of Church Hill is honored to serve the Joinson family.