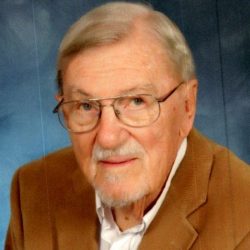 David was born September 19,1925 in the small settlement of Steadman, Lexington County, South Carolina to D.E. and Louise H. Rikard, both deceased. He spent his early childhood and youth in Batesburg S.C. where he graduated from Batesburg-Leesville High School in 1942. David served his country in the U.S. Army Air Force during World War 2 in the Pacific Theater. After the war, He attended and earned a B.S. degree from the University of South Carolina.

He moved to Kingsport in 1950, where he was active in Jaycees, Exchange club, managed then owned an insurance agency, then a Midas Muffler Shop until he had to sell it due to illness. David spent a year and half at M.D. Anderson as a research patient in Houston TX. David returned to Kingsport, First becoming active in real estate, then to real estate appraisal with specialty studies at a number of universities in NC., FL. and NY. The work he did for 30 plus years, specializing in commercial, Industrial, and fractional interests in real estate property. He also taught real estate principles and appraising at E.T.S.U.,King College and U.T. He loved college football, and for a number of year he was a fan and recruiter for the S.C. Gamecocks

He was preceded in death by his first wife Blondell Faust Rikard who passed away on April 5, 2002; his only sibling Mary Alice Breen who passed in 2010; along with is second wife Mary Herron Trent who passed on April 21, 2013.

Pallbearers will be family and friends. Honorary pallbearers are members of the Men’s #1 Class of First Baptist Church of Church Hill.

A special thank you to First Baptist Church of Church Hill and Amedisys Hospice.