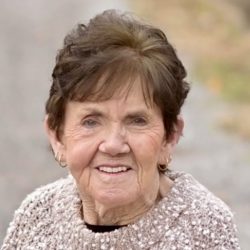 NASHVILLE – Helen Christian Rutledge, 85, passed away on June 23, 2022, peacefully with her family by her side in Nashville, TN.

We will be having a Celebration of Life for Helen on Saturday, July 23, 2022 from 1:00-3:00 PM at the Moose Lodge #972, 1213 Stewball Circle Kingsport, TN 37660.
Thanks to all of you that have reached out to our family. We really appreciate your prayers and kindness! Thank you to everyone for loving our mom. It has been an incredible journey.

NASHVILLE – Helen Christian Rutledge, 85, passed away on June 23, 2022, peacefully with her family by her side in Nashville, TN.

Helen was born on May 28, 1937, in Church Hill, TN, to Herschel and Virginia Woods. She lived in Kingsport, TN, for most of her life. For the last 17 years, she has lived with her daughter, Karen, and family, living the last four years in Brentwood, TN. She missed her friends in Kingsport and Church Hill but loved spending her days with her youngest daughter, grandchildren, and great-grandchildren. She also immensely enjoyed visiting her daughter, Robyn, and son, Mike, and their children as often as possible.

She graduated from Church Hill High School in 1955, where she was a varsity cheerleader. She then went on to attend Whitney’s Business School in Kingsport. She married Delmas Christian on October 19, 1957, who preceded her in death. She then married Bobbie Joe Rutledge in December of 1989.

Helen was the most incredible and loving mom, grandma, and great-grandma. She was witty, kind, and hilarious. She always knew how to make people laugh. She loved and cared for her family deeply. She worked unbelievably hard her entire life and would give the shirt off her back to anyone in need.

While living in Goshen Valley, she owned Helen’s Grocery and was a school bus driver for Hawkins County Schools. She eventually ran two successful grocery stores. She had a brief “Hollywood moment” in 1984, as she worked on the set of the film The River, where she drove Scott Glenn around the film locations. She then went on to work at The Moose Lodge, Eagles, and VFW, where she met many lifelong friends. Besides work, Helen was also passionate about sports. She was a member of the Senior Olympic basketball team and an avid bowler on the Kingsport mixed doubles team. If you knew her, you loved her. She loved working and playing sports with her friends. Her happiest times in life, though, were those spent with her children, grandchildren, and great-grandchildren. She LOVED them more than anything else in the world. They were the apples of her eye and the sunshine in her heart.

A celebration of life will be announced at a later date and will be held at the Moose Lodge in Kingsport, TN.